Also available as Digital Download ($5) or Cassette + DL ($7  plus shipping).

Release date: August 11, 2014 (tip to the wise: pre-orders are getting shipped immediately) 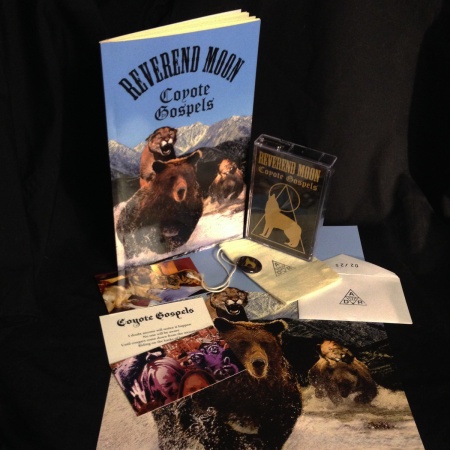 BIO/BACKGROUND:
The REVEREND MOON is Jakob Rehlinger of Toronto-based psychedelic space-rock band Moonwood as well as founder of the Arachnidiscs Recordings label. Over the past 20 years the good Reverend has laboured steadily at Coyote Gospels, an album of 13 testaments of ersatz-praise and upside-down faith. The song cycle was born in the manger of university poetry workshops beginning in 1994. It grew into an awkward adolescence at the dawn of the millennium when Rehlinger suffered a nervous breakdown and was paid for his trouble in what he called several “dark prophecies” in the form of visions. These hallucinatory cosmic messages from beyond are recounted in the songs “A Message for You”, “Black Sun Rising” and “Old Graves” — wherein animals reclaim the Earth from humans. Since 2007 Rehlinger has been polishing these heretical-hymns and pseudo-psalms over several demo versions before setting out to record them in earnest beginning on the Easter weekend of 2012.

This entry was posted on Monday, July 21st, 2014 at 1:25 pm and is filed under Music. You can follow any responses to this entry through the RSS 2.0 feed. You can leave a response, or trackback from your own site.