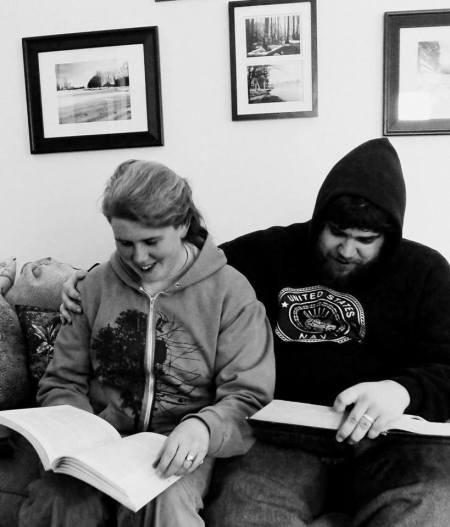 I can’t remember how Zachary Corsa and I first got to know each other, but it had something to do with being lefty pinkos ganging up on someone we didn’t agree with on a Facebook thread. It probably had to do with gun control or same-sex marriage. Anyway, we became fast friends and there’s been this idea floating around I’d release something by Lost Trail, who I had this vague understanding was kind of a big deal. If you’re unfamiliar with them, this is from their website:

LOST TRAIL is the ambient/dronegaze/experimental noise project of husband-and-wife duo Zachary Corsa and Denny Wilkerson Corsa. Based in the mysterious small city of Burlington, NC, The Corsas utilize lo-fi and obsolete recording technology in their music, aiming to capture a sense of atmosphere and landscape in both man-made and wild environments. Working primarily with second-hand analog equipment, their work is a vivid patchwork collage of damaged cassette loops, field recordings, primitive percussion, layers of ethereal guitar drones, wailing feedback and static, and skeletal traces of antique piano and organ. The themes of Lost Trail’s work often include a sense of the otherworldly or supernatural, strong ties to nature, human calamity, and a fascination with the concept of passionate belief systems. The songs themselves are raw, broken, minimalist, imperfect, emotionally resounding and chaotically unpredictable, all composed in the spirit of reckless, heedless improvisation.

That all seems fairly reductive, not really capturing how Lost Trail winds through the wilderness and where it leads. But if called upon, I’d have to be even further reductive and just say: Magic.

Arachnidiscs Recordings: Dude. What’s up with your country?

Zachary Corsa: Ha, I take no responsibility for the state of America at the moment. I think what’s important to remember is that a good 80 percent of people here are NOT total fucking lunatics, and we’re as dismayed by the current state of affairs here as anyone else. It’s a frightening place to be right now, especially if you have a love for this country and the landscape and most of its people. But these things go in cycles. If nothing else, right now its generating some awesome art.

ADR: Yesterday was the 45th anniversary of the Kent State massacre. It does seem like things are going in cycles.

ZC: We’re definitely in a valley, but there’s peaks to be found. there’s people here committed to change and moving forward. It’s easy to forget that America is a beautiful country with a lot of great people and art. On the surface it just seems like an over-commercialized consumerist hell of stupidity, reality TV, megachurches and Best Buys. but there’s more here.

ADR: “Over-commercialized consumerist hell of stupidity, reality TV, megachurches and Best Buys.” That pretty much describes Canada right now. Only perhaps we have fewer actual mega-churches. So right now what are these peaks in American culture you mentioned?

ZC: Marriage equality, despite all desperate and petty efforts to stop it, is becoming a reality, for one. Ditto for marijuana legalization. I also think the current political and social climate is encouraging amazing art. The situation with North Carolina’s extreme rightward drift has resulted in a real banding together within the arts community here. People are united, people who weren’t politically conscious are allowing themselves to be arrested on the capitol steps if it means drawing attention to Pat McCrory and his cronies and what they’re doing to our state. People won’t put up with being pushed around like this, and I think there’s going to be some big paradigm shifts soon in this country.

People are also having their eyes opened to the current state of our law enforcement in this country, and to institutionalized racism they blithely ignored for years.

ADR: Yeah, that’s something I wonder about when you watch the news, or go online or whatever people do now, things seem so dark. The perception is it feels like things have gotten a lot nastier since the ’80s and ’90s. But if you watch comedies from that period, they’re rife with homophobic humour. It was just rote to make fun of effeminate men and butchy women. Whereas now that’s more often seen as not OK. So maybe things are a bit better now, but it’s just that people are less willing to accept such a low bar of enlightenment. Same with “dirty cops” killing kids. That was just an okay thing for cops to do in those films.

ZC: There’s always going to be an element of hero and vigilante worship in western culture. We always need an “other” to demonize and scapegoat for our own issues. It’s never going to go away. But it helps to look at individual interactions and smaller communities. On the whole, people still treat each other decently here. The flipside of that is that my perspective is that of a white middle-class male. Living in a mostly-minority neighborhood, I see the dark side of that reality all too often.

ADR: Let’s set the larger scope of society aside and focus on your neighborhood. Tell us about about where you live and the scene there.

ZC: Burlington is a small city that was once one of the textile and hosiery capitals of the country. It’s a typical story in America, though. The jobs have gone overseas, the mills are abandoned, and the city’s become a place of drug use, poverty, blight, gangs, etc. Burlington is halfway between two larger metropolitan areas (Greensboro & Winston-Salem to the west, Raleigh/Durham/Chapel Hill to the east), so its always a bit orphaned and shunned. It doesn’t have the cultural currency those other towns have. Our university, Elon, is far enough outside of town that student life doesn’t intersect with city life.

The other side of that is that there’s a beautiful downtown that’s being revitalized, and a great arts scene. Visual art especially, folks like Stewart Sineath, Gary Smith, and Albert Kauslick. Music-wise, there’s some really great bands, too. Nathan Arizona, Crumb Catcher. Not much in the way of experimental stuff that I know of, mostly just us and our friend Tim Collapse, who makes great stuff as Animals Like Earthquakes. We moved here because we could find a big old house (in our case, 1910) to record in for cheap.

Burlington also has a fascinating history. It’s a strange place. The vibe here is Lynchian and otherworldly at times. The city history is full of unsolved murders, rumors of demon worship, hauntings, serial killers, mythical monsters, unexplained fires and explosions, secret government work… It’s not like anywhere else I’ve ever been.

ZC:  Central NC is usually hot summers and very mild winters, but the last couple of winters have been rough. Of course, rough for us is ten-fifteen degree days. Usually the winters are just rainy and a little nippy.

ADR: That’s about -10 in Canadian degrees, not bad. When you say hot, how hot does it get? Toronto’s winters are beginning to get me down.

ZC:  Upwards of 110-112 that I can remember. The humidity is what really gets to you. sticking to everything. Driving is a herculean exercise in tolerance.

ADR:  Holy crap. That’s 44 in Canadian, plus humidity… Yeah, I’m staying put. Not that your government would let me move down there anyway.

ZC: And yet Canada is Xanadu to so many of us disillusioned American progressives.

ZC: Grass is always greener, I suppose, even Genocide Grass

ZC: The folks who are so far to the left that every single thing offends them would never let you tour.

ADR:  And the far right would claim I was infringing on their religious freedom somehow.

ADR:  That’s one thing about Canada, Genocide Grass would probably be allowed to tour. The left-wing knee-jerk censorship grass is probably greener here. So, when we talked before, you didn’t have much info on the mysterious DOR. Any new information?

ZC: DOR are shady. Two dudes (John Rutherford, Jacob Worden) near Charlotte that churn out the good stuff. Charlotte’s our biggest city, about 90 minutes south of where Denny and I live and that’s about all I know about ’em! They’re mysterious. I’ve not met either of them in person. I was frankly surprised at their location when I discovered their music. Charlotte has a reputation as a cultural wasteland to the rest of North Carolina, despite being such a huge city. Probably unfair. But we’ve never played in Charlotte despite being 90 minutes up the road. Charlotte is pretty into malls and Nascar.

ADR: I wonder if the royal baby was named after Charlotte?

ADR: I would’ve won the office pool then.

ZC:  I’ll never grasp the appeal of seeing cars drive around an oval for three hours

ADR: Sometimes they spin-out and burst into flame, I think.

ZC: Maybe there’s YouTube compilations. I’d be fine with just watching that for a few hours. Do they have roller derbies in Canada?

ADR: Oh yeah. I went to one a couple years ago. They weren’t very fast though. Not like in the movies.

ZC: Languid roller derby. I cant think of anything sadder

ADR: It was like they were falling down in bullet-time.

ZC: That makes me think of dancing bears being cattle-prodded to get up and sway for a few precarious seconds before collapsing.

ADR: I think you just thought of something sadder.

You can pre-order the split cassette with LOST TRAIL and DOR at Arachnidiscs Recordings Bandcamp. 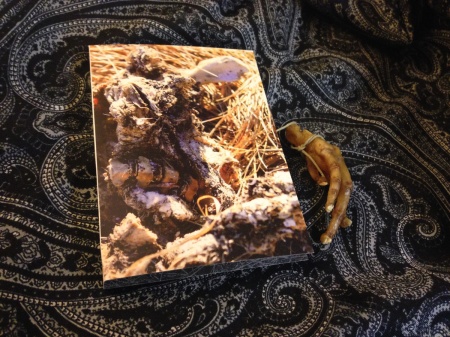 Pre-orders come with a magic claw foot talisman for good or bad luck (your choice).

Interred Views is a series of interviews with Arachnidiscs Recordings artists. This interview was conducted by Jakob Rehlinger.