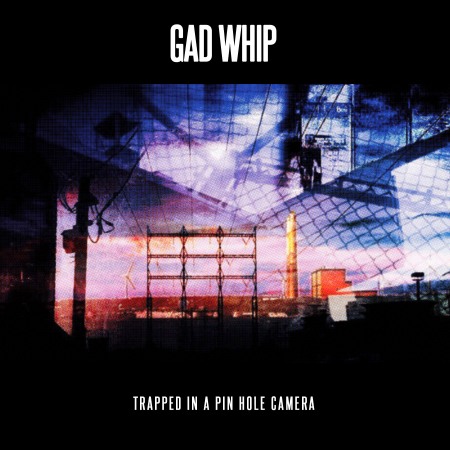 All day every day, making tomorrow seem like yesterday.

The musical ennoblement of the Big Time Television pirate music video channel in Max Headroom, GAD WHIP come on like a nightmare wedding of Mad Max and Bladerunner with their anarchistic trash heap of tripped-out industrial post-punk.

Trapped In A Pin Hole Camera features the core trio of Amos, Bolam and Davies aided and abetted by Neil Campbell (Vibracathedral Orchestra, Astral Social Club etc), Paul Walsh (Smell & Quim, Foldhead etc), Jimbo Baxter (Freaks Union, The Fuckin’ Glorious etc), Eva Davies & Ryan Walker (both on extra guitar & bass duties). Recorded in several kitchens throughout the summer of 2017 in West Yorkshire, UK, with “one mic and a busking amp” the band claims, though the recording is by no means the lo-fi shambles that implies.

Gad Whip formed in the summer of 2014 and have since put out 4 tapes and a couple of EP’s (one of those being a 12” on ever/never records). Named after a murkily arcane North Lincolnshire ‘old religion’ ritual involving a long cattle whip being shaken above a priest’s head on Palm Sunday or something, Gad Whip are old enough to know better but they don’t.