MOONWOOD have some live shows coming up in Toronto and Montreal over the next month. 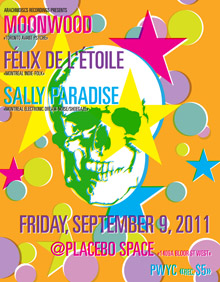 River Ghosts and The Path reviews

From Dying For Bad Music:

“Moonwood is multi-instrumentalist Jakob Rehlinger from Canada and he is a pretty prolific musican. Put out some great records in the past and River Ghost is his freshest one.

This is psych folk in it’s best sense. Layered, droney reverbed instruments, some hand drums, guitar and other things happens in the background. Stoned and jam like ethno drone folk. This sounds like Dead Can Dance without Lisa Gerrard and Brendan Perry… Highly recommended!”

From Dying For Bad Music:

“This is a split cassette with a live concert of Theo Angell on one side. Unfortunately I only know the Moonwood side, but it’s fucking magnificent! If you remember, the River Ghosts album was a mostly instrumental psych trip and The Path is now like a map for the strange terrain of River Ghosts. Highly recommended!”

From I Am Rare (Russian blog):

“Moonwood – it multi-instrumentarist of Toronto Jakob Rehlinger, playing a psycho-folk only in minor tones. At the moment he released quite a few albums, and in each of the main theme of the notorious Chekhov’s “sound of a breaking string” – an obsessive feeling that life is something completely and irrevocably gone, the remaining void is filled mostly aching melancholy, akin to a dental pain, no wonder musician in the tags to the annotations to his previous album River Ghosts put the phrase “for those suffering from seasickness.”

The Path, in fact, not an album, it’s part of the split cassette with the other musicians performing a similar kind of weird-folk, whose name was Theo Angell. This release is a bit different in style than previous albums Moonwood, there is the whole song material, while, as before, his music was mostly instrumental, sometimes he sings, like spells, phrases, and even more of his singing was more like a curve, even with tools Moonwood sound, simulating the melancholy tone of the human voice (despite some similarities with Grouper, Moonwood music is not as depressing as it may seem, the measure of the conventions they have always respected, and in general, but rather a kind of cabaret makabr). And if this album to your music Jakob Rehlinger described in terms such as acid folk and drone folk, here it is closer to the Gothic alternative country music. If the window nasty rainy weather or if you pull up to the last visit to the dentist, the best soundtrack to your life do not come up.”