Most of our demo submissions come via email. As a rule these submission are pretty vague, usually containing no more than “I have some music I’d like to release on your label” and link to a Soundcloud. A lot of these just end up in the trash folder since I’m not much interested putting out music by people who don’t even bother to introduce themselves.

This didn’t prepare me, however, for a physical submission we received in the mail a few months ago from a band or artist who appeared to be called Semen Priest. I wasn’t sure if it was a joke or a legitimate submission and, either way, if it was something more sinister.

Perhaps it’s best to start with a complete inventory of the padded mailer:

Well, that last line was disconcerting. Then I noticed the mailing label was addressed to me personally so I decided this was clearly a friend who’s having me on. I chose to ignore the voice in my head that was telling me: Your name is well documented online as being the guy who runs Arachnidiscs, it’d be reasonable to put your name on the envelope and assume you live there.

I was convinced it was one of my weirdo musician friends as the package was mailed in Canada, But the postmark is obscured so I couldn’t even tell what province it was mailed from. So who was it? I decided I’d have to listen to the music for a clue.

I gingerly removed the CD from the baggie, which was sticky from some liquid that had dribbled out of the condom. Whoever sent the package had thought ahead. They wanted the disc to be playable after my initial shock had subsided. It occurred to me at this point maybe I shouldn’t touch anything in the package and maybe call the cops. And perhaps a HazMat team.

There was a faint coppery blood smell, but also sweet, sour overtones. Like a marinade that’s had a bloody steak sit in it over night. Or perhaps menstrual blood. Though I thought the smell should be stronger in that case. I wasn’t about to taste it to find out if it was just BBQ sauce.

I’m not sure what I expected to hear on the CD (power electronics or death metal were my assumptions), but I really expected not to like whatever it turned out to be.

I was blown away.

I don’t who Semen Priest would cite as influences, but I was hearing a psychedelic melange of  Skinny Puppy, PiL, early Ministry (was the rose a hint?), Underworld and My Life With The Thrill Kill Kult, but funkier, dubbier and poppier. For me it was a throw back to my industrial/electro-goth roots in the late ’80s and ’90s yet there’s something very contemporary about it. Not knowing the age of the band, I didn’t know if they were coming at this sound from first or second hand experience or just completely on their own. Grimes, Doldrums, Sexy Merlin and Daft Punk could just as easily be their influences. Also, Black Sabbath.

I didn’t recognize the singer’s voice since the vocals were all done using a vocoder or extreme pitch-shifting effects. No clues there.

I made a list of likely suspects from my past. Vancouver sound installation artist and electronic music producer, Legsss came to mind as someone who (at least used to be) perverse enough to get a laugh out of a package like this. It was precisely the kind of thing we would have done (but never did) fifteen years ago with our band The Metrics. But the thing is, that was fifteen years ago. Also, the music didn’t seem to fit with what he’s up to these days. Another likely candidate from The Metrics is living somewhere in Asia now, so he’s ruled out.

Partli Cloudi came to mind as he sent me the master for his new album (to be released later this summer) on an unmarked USB drive in an envelope with a false return address. But I know him as well as almost anyone can and he doesn’t have this music in him.

It is, however, the kind of music semi-reformed goth and west coast EDM artist Joey Chaos might make. But it’s a bit too lo-fi for him, sounding like it was maybe recorded on cassette 4-track and he’s a completely digital-age kid. And though similar, the vibe isn’t right.

The vocal processing and perversity brought to mind a recent acquaintance, Toronto’s Doom Tickler. But that didn’t seem right either. Beard Closet or Primate Pyramid (who have an Arachnidiscs split tape coming out) were also considered and dismissed. But also the whole Jeunesse Cosmique crowd in Montreal are capable of these kinds of audio shenanigans…

In the end, I didn’t contact any of these friends as I figured one would come forward eventually and we’d discuss the release. For the time being, I wasn’t going to put a tape out by someone who may very well have sent me bio-hazardous zombie juice without the courtesy of even giving me an email address. I tried to put it out of mind with only a slight sense of foreboding.

About a month after the package arrived, I received an email from semenpriest@gmail.com. It read: “Here’s artwork. When does tape come out? We haven’t forgotten. xoxo.” Attached was a scan of a crude pen and ink drawing of an inverted cross made of penises (see cover, below).

Still under the assumption they would end up being someone I know, I responded by explaining that though I loved the album, I needed to know who they were and where they were from. Just so I could send them some copies of the tape, if nothing else. They said they were “north and west” of me (that’s a lot of Canada) but needed to remain anonymous due to fears about jeopardizing their professional careers and gave me their absurd stage names. They did eventually give me a Paypal address I could send “profits” to (optimistic!) and apologized if I was alarmed by them being “too forward”. 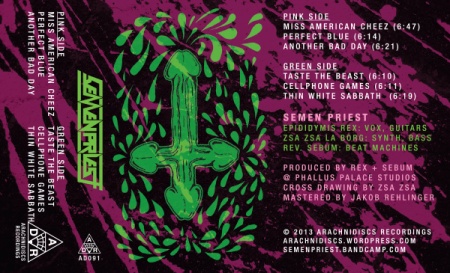 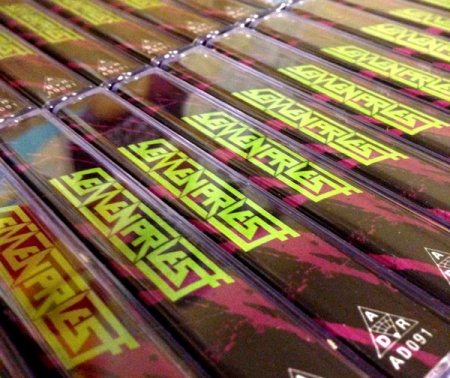 Well, though cryptic, and perhaps literally insane, they seemed like nice people (I hoped!) who wouldn’t actually burn our house down if we didn’t put out their tape so I shrugged, took the RCMP off speed-dial, designed a cover based on their doodle, mastered it a little and sent it off to the duplicators. Release date to be finalized, early-mid August, 2013.

I still have no idea who they are. They have a Tumblr up now (Bandcamp to follow) which doesn’t give much away (but has some previews of the tape). If you know who they are, I’m not sure I want you to tell me. There’s something thrilling about not knowing.

This entry was posted on Monday, July 8th, 2013 at 9:47 am and is filed under News. You can follow any responses to this entry through the RSS 2.0 feed. You can leave a response, or trackback from your own site.